Thanks to @cksurfdude for the suggestion.

This is an older article on the site, but still one of my favorites. I encourage you to read it. 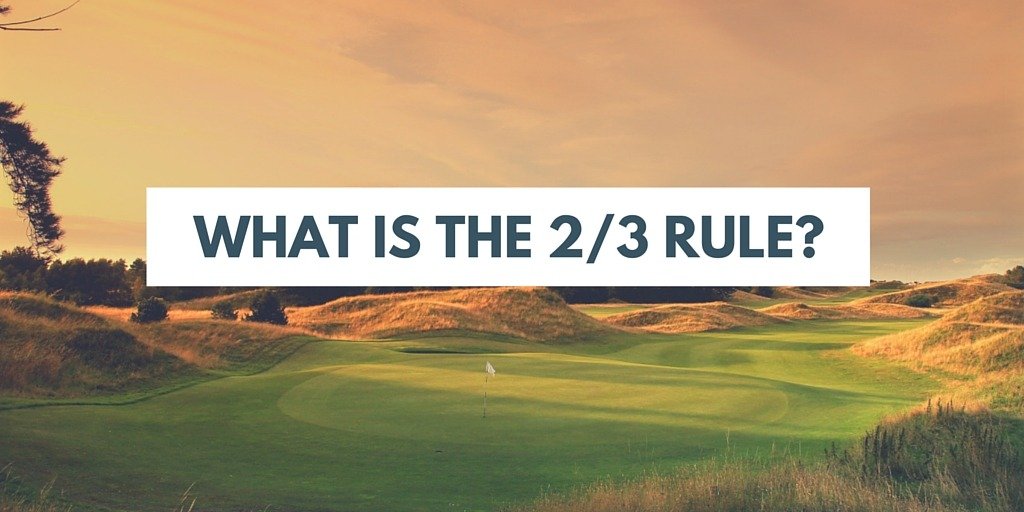 The 2/3 Rule, and What It Means For Your Game | Practical Golf

As golfers we all have completely different interpretations of how our rounds went. My gut feeling is that most golfers are way too hard on themselves, and they often have wildly unrealistic expectations of what their performance should be on the...

Expectation management is one of the most critical parts of the game, and I think the concept of the 2/3 rule can help a lot of you. Let’s discuss in this thread when you’ve had a chance to read.

That might have been the article that first brought me to the site! I was googling an actual golf rule and came across it. Gave it another read and definitely still agree with it. Something that connects with me is that (like discussed in the Bad Golf Happens thread) we need to enjoy golf even if the round isn’t going our way. One thing that my helps my enjoyment personally, is figuring out a way to make the round work. It could be changing something up or leaning in on something that’s working. I think this has been a strength of mine (especially this year) and my scores have shown it. There are a few blowup holes, but no blowup rounds.
Back to the article, this mindset of “what can I do to make this round work” helps keep me at least keeps me in the game at one out of the three phases. Walking off the course of these rounds, I can feel grateful for the opportunity to play, proud of how I held the round together even if it was messy, and confident in the ability to improve. Those are the types of emotions that will keep me coming back (hopefully the next day if I can manage it).

Love this; think I’ve quoted Jon’s 101 book before but to beat a horse, expectation management is key!!

For example, watch any pro, their Fri score could be a 72 then their Sat score is a 65 (7 shots). So why do we as amateurs get truly pissed when our scores fluctuate between say scores of 78-85.

I found as soon as i accepted this i was able to draw on positives per round like FIR, GIR etc

For example, watch any pro, their Fri score could be a 72 then their Sat score is a 65 (7 shots). So why do we as amateurs get truly pissed when our scores fluctuate between say scores of 78-85.

No matter what level of golfer you are, there’s always going to be a distribution of scores. I think for most players tightening that distribution on the higher end is probably going to lead to the biggest gains. In other words, you have to find to make your bad rounds not as bad. That’s one of the hardest things to do in golf, but it’s something that more players should try to take pride in!

I think a key is not letting one aspect of your game affect others. I just played 12 holes (had my 2 young kids with me). I made it through at +7 over (I typically shoot mid 80s over a full round) entirely thanks to my putting. My driver was all over the place on a few holes, if I’d let the bad thoughts from miss hitting driver (my favorite club to hit) the round could’ve quickly spiraled. Instead I just tried to execute each shot, and had a middling ball striking round, but (for me) was lights out putting. It helped me score (a birdie, 3 pars) on the few holes where I was able to put my entire game together, and helped me stay positive on the rest.

This year has been very frustrating for me. My scores in the past years have ranged in a very tight range of 75-80. At my age of 76…this year the range is 77-82. I just feel as though I have played terrible. But, just as you say, one part of my game has always bailed me out.
I used to average 9-11 gir…this year its more like 6-8. Those gir’s are what has me down. My drives are great but shorter than ever which makes the next shot tougher. But my second shots are what has been my down fall.
I am learning to adjust my expectations however. You can’t fight the aging issue. I’m still going to fight this thing by getting stronger and more flexible. Got to keep shooting my age a few times a year.
Thanks for the article and for listening.

Murv - first off, that’s amazing! I highly recommend taking a look at the @Fit_For_Golf workouts. He has a number of clients he works with who are around your age and they’ve seen great results in boosting their strength and flexibility.

I love this article and the comments so far. If I can achieve 1 of 3 for a round I am satisfied. I read Rotella’s book back when it came out and always make sure I am enjoying golf regardless of how I’m playing on a particular day.

The discussion about how scores vary from round to round made me think that I’ve never seen an article addressing how the scores of your pros vary from day to day. The stats from Every Shot Counts with respect to the variability of individual shots was an eye opener for me because it showed that even pros miss a lot of the time. I think a similar piece about scores would have the same effect.

Really get a lot out of your articles, and REALLY wish I’d read this one before heading out to the course today…

I am very hard on myself when golfing - no, I do not expect to hit perfect shots all the time … I fully embrace my ability level as a recreational bogey golfer - but I do tend to get down on myself unnecessarily hard after a decidedly less-than-perfect

Been working on my attitude and mental game skills (in tandem with ball striking skills) but today I disappointed myself – so I’m “putting it out there” and publicly shaming myself to do better!!!

In other words, you have to find to make your bad rounds not as bad.

Funny coincidence - had this exact conversation with my wife this afternoon, while we were waiting (…and waiting…

) for the group ahead to tee off…

She mentioned something along the lines of sometimes one thing works for her but then another time out it doesn’t … so I said, well think of your game in three main areas:

And I continued with … On #1 you’re doing ok - not long, but improving, and generally in or near the fairway and rarely in trouble.

On #2 you’re generally pretty good, too - can chip well and sometimes get it real close, and can putt well enough … for someone who seldom practices!

So… It’s #3 then, the everything in-between, where you’re losing strokes… She nodded her head, ‘yeah seems like I swing a lot some holes’ … Yeah and so that’s what you have to work on!

(…and easier said than done, amiright??)

Sometimes I think I should read my own articles before teeing it up! I fall victim to the same things on the course, I’m not perfect. Just trying to get a little bit better over time

Glad you enjoyed the read

Just trying to get a little bit better over time

That’s really the key thing! Remember it’s a game - and enjoy the time on the course - but approach the game with a curiosity and a desire to improve

Nice article, hadn’t read it before. I shoot around 100 and I think I normally get carried away thinking if I shot over 100 I had a bad day. That may be true but I’m sure sometimes, I can think to myself and think if I did better on any of the phases. It’ll help to stay more positive.

glad you liked it! I think it’s a fundamental concept when it comes to expectation management

Unfortunately the 2/3 rule was out in full force today. Even worse, it changed front to back. Front was bad driving. Back was bad putting.

It’s just a law of the universe

Resulted in my worst round in 15 years in a tournament round. Embarrassing

Couldn’t get anything to go my way. Hit into hazard. Had to punch out. Ended up in divot in the fairway.

Hit it about 15 shots better than score ended up. Hoping to career it tomorrow.

Better today, other than skulled 50 yard bunker shot into a hazard. Putter - good. Tee - decent. Irons - decent. I think that equates to 2/3