So technically it must be a push fade. With the same swing if I don’t open the face I hit a hook. I have a standard left hand grip but my right hand slips around the side of the grip. Then when I swing I open the face on the back swing till my right hand is under the shaft and through impact the right hand slides under and powers my drive. I am definitely not out to in. I am too much in to out.

No idea! I don’t know what all the different shots are or all the possible combos… I’m still learning all this stuff on path and I’m still not confident in any of it.

I have a hard time wrapping my head around some of the path-to-face relationships and resulting shot shapes as well. My buddy told me that the way DJ “fades” the ball is not the way average golfers “fade” the ball, i.e. that DJ is somehow swinging just slightly in-to-out but that his driver face is just slightly open to his path, which results in a powerful, mostly straight ball flight that just falls gently to the right at the end. In other words, he is not wiping across the ball with an out-to-in path where the ball starts off pulled to the left and then spins a lot back into the fairway. I don’t know, hard to get your mind around, but I think I get it.

Yeah. I’m still not sure on it… need to google it and read some more. It’s honestly the reason I started this thread, as I thought I understood the basics and then listened to @Jon s podcast and got confused again (not through Jon’s fault, I just don’t clearly understand this stuff).

I’m trying to gain a better understanding of it still…

As @Adamyounggolf says above with a out to in path to hit a powerful fade you need a shallow attack and a forward leaning shaft. I get that with a delayed hit as the hands drop from the top to almost behind me and I pivot and with feeling of the right hand slipping under the shaft I hit, aiming at the left rough but flying down the middle and falling to the right. I don’t think I could get the same distance if I swung out to in. I know my swing is not a model to be copied but I am making it work for me.

To hit a fade, the path MUST be left, and the face needs to be open to it (but not more open than the target line).

To hit a draw, the path MUST be right and the face needs to be closed to it (but not more closed than the target line).

My buddy told me that the way DJ “fades” the ball is not the way average golfers “fade” the ball, i.e. that DJ is somehow swinging just slightly in-to-out but that his driver face is just slightly open to his path, which results in a powerful, mostly straight ball flight that just falls gently to the right at the end.

I don’t know if your buddy is right or not about DJ, but but an in-to-out swing with a clubface aimed right of the path will cause a shot that starts out (approximately) where the face is aimed (a little right of the path) and curve further right. If DJ wants to hit the fairway with that shot, he’d need to set up slightly open, so that his (in-to-out) path is still left of his intended landing point. You can hit a fade with an in-to-out path, or a draw, or a straight shot. If you set up square, swing in-to-out, with a clubface open to the path, your shot will start right and go further right. I know, I have that shot, among a few others.
@Adamyounggolf has it absolutely right on his website, the ball starts about where the clubface is aimed, and curves away from the path. That happens whether the path is in-to-out or out-to-in.

Yeah, that makes sense, and I think that may be what DJ does. Aims up the left with an open stance and bombs away!

Saw this pic today which reminded me of this thread. Really helpful for me, and I thought it was worth sharing! 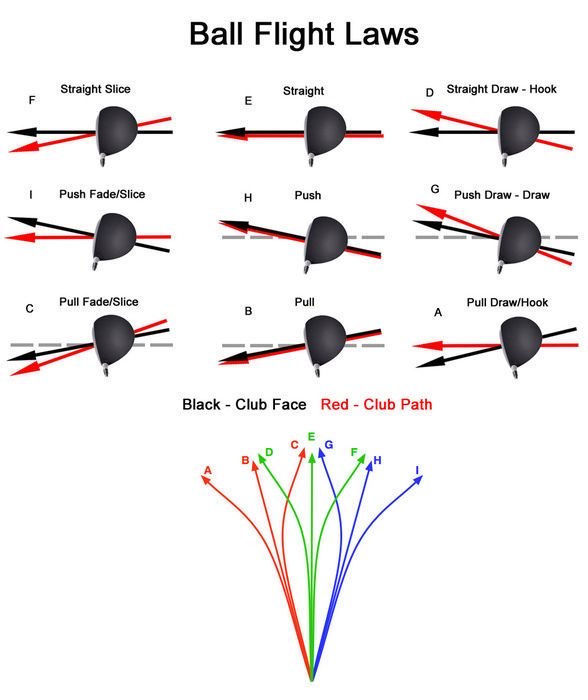 This is super helpful! Thanks.

Such an important concept to understand, thanks for sharing!

cheers to that! Practice manual is great. My kids will be starting youth sports in a few years and I think it The Practice Manual will be one of the biggest influences on how I coach.

Great visual. I am currently working on making sure my pattern only produces E, G, and H!!

Unfortunately, I am good for most of these shapes on any given swing!

Ok, so I should have just bought the practice manual months ago… in two sentences it fixed my confusion…

Precisely. Once you get that it’s easy to diagnose the why of a shot.

Hot pull hook into the woods? My clubface was closed to a path that was fairly neutral or outside in.

Push slice? My face was open to a path to neutral or inside out path.

Perfect baby draw (my shot of choice when I’m on), face ever so slightly closed to the path which is inside out to some extent (roughly 4-5 degrees for me)

You would nerd out over “accuracy plan”

I am going through it slowly. The base idea of finger system dispersion is awesome and I am reworking my whole stats capture!

Lots of technical stuff around how to influence path and face (and really well done I may add). Being careful with this as it is a ton of info, well presented, but still a lot. Biting off one or two segments a week and incorporating some things

I’ll check it out after I finish the Practice Manual… Honestly, I wish I had been more analytical in my golf game earlier… lots of good takeways thus far that could have helped me in my youth.

I’m really excited to spend some time on a launch monitor soon… I think seeing the numbers and “feeling” the shot are going to really help me connect words to actions. I think it’s a big part of the value of simulators that you can “see” your swing path immediately.

I’m really excited to spend some time on a launch monitor soon… I think seeing the numbers and “feeling” the shot are going to really help me connect words to actions. I think it’s a big part of the value of simulators that you can “see” your swing path immediately.

I’ve been taking a series of lessons at a GolfTec center, where they use the Foresight GC Quad which of course displays like a dozen or more metrics - including “azimuth” which … as I understand it but may be wrong … is the relationship of face-to-path at impact.

And then you can compare the number to the ball flight (or: simulated ball flight) displayed.

For me, though, the bigger contributor for working on path and face issues is the video playback annotated and explained by the instructor (so I guess I’m more of a visual golf learner).

Speaking of swing path, especially with the driver, what speed do trainers recommend when learning or changing a swing path?

I saw a video of an LPGA pro being interviewed and she said her coach told her to always swing as hard as possible. I can’t recall, but I also remember hearing that you should take it slow until you get consistency and then increase the speed? Regardless, I seem to have a hard time consistently hitting the ball on the center of the driver face whether I swing slow or fast. I feel more control when slow, but also feel like the total yardage will be low. Also, is there more time for error with a slow swing?

I can tell you what I was taught. Stand on a tee box, proper posture and distance away from the ball with your driver. Keep your feet together though, do not separate them. Swing the club as full and as fast as you can without losing your balance and falling over. That’s as hard as you should swing a club. As your balance improves, you will be able to increase your speed.