Arm lock vs Side saddle putting

Admittedly, I like to try new things and tinker…which is not always easy as a lefty. There just isn’t much out there (equipment) to try without having to spend a ton or build it yourself.

I’m currently putting an Odyssey #7 that I was fitted for and like (not love)…heel shafted, standard style, jumbo grip, 35 inches.

I have a Wilson Infinite Southside that is center shafted and am thinking about bending/building it into either an arm lock or face on putter.

Anyone in this forum tried both styles of putting (arm lock and side saddle) and have any silver bullet stories to help me decide which to try?

Side Saddle Putting there is a thread on it! I’ve done some research and it seems like an interesting idea… you can pick up one on eBay for $150 ish, but I have no idea what to look for.

I’ve spent a lot of time working on my putting recently, including looking at various putters. I find putting to be an incredible mini game inside of golf, even if it’s one that costs me strokes. 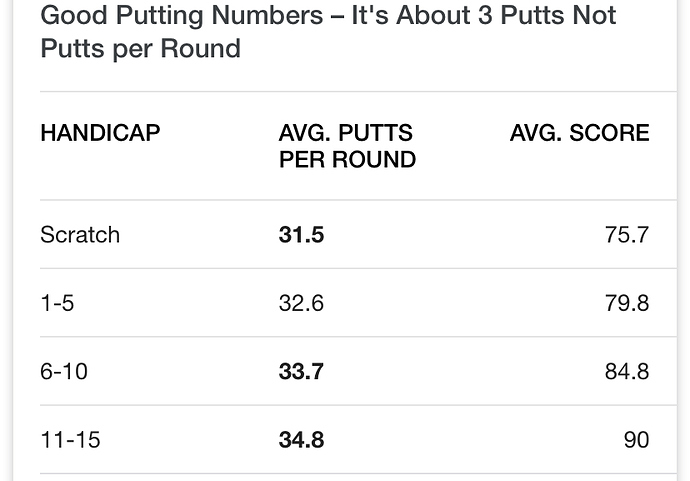 I was curious, and a quick google search gave me this… obviously it doesn’t tell the full tale, but number of putts per round is about 1/5 strokes seperating handicaps. Unless you are a terrible putter, it’s not a huge place to make gains. (I’m a 6 with an average 35.5 putts a round, I can obviously improve)

That said, maybe side saddle is a place to gain a huge advantage… Bryson tried it and abandoned it… others have said it significantly improves their stroke. Facing the hole and “pushing” the putter are probably significantly easier ways of putting if you can adapt to them. Personally, I’d I were going to spend the money, I’d go side saddle.

There are also more traditional options that offer some different types of help… seemore is built to help alignment, edel focuses on aim and consistency of stroke, direct force has “zero twist “…

Interesting. I’m a 12.5 right now averaging 34 putts on my last 10 rounds. So do you think the “way over simplified” analysis is that if I drop my putting average a stroke it brings me down to the elusive single digits handicap…or does it mean there are other parts of my game that are likely holding me back more that I should address first.

My GIR is super low…so I’m also averaging 7-13 chips per round as well. Maybe if I chop closer consistently it naturally drops my putts lower? I don’t often 3 putt…but I also don’t often 1 putt.

Just for comparison, this was published a few years back, looking at the variation of certain statistics sorted by handicap range:

YOU (vs) OTHER GOLFERS How do you compare to other golfers in the US?


For a 12 handicap, 34 putts and 6 GIR isn’t unreasonable. This indicates that you probably should look to all aspects of your game to improve. Strokes Gained research suggests that, on average, about 2/3 of the difference between handicap levels comes from full-swing stuff, and the remaining 1/3 comes from short game and putting. So working on improving your swing is most likely to produce the greatest improvement, but its probably the most difficult thing to improve.
2 Likes
Craigers December 5, 2020, 4:59pm #5

For the purpose of this conversation, I think if you have 34 putts a round, spending time learning how to putt side saddle is going to be an ineffective use of your time and resources (assuming you are limited in practice time and cash). Dropping your average to 33 putts a round will drop your handicap by 1 stroke.

Greens in Regulation is regularly tied directly to handicap, but it doesn’t necessarily tell the full story of where you need to improve. Average putts a round is also an incomplete picture (I was more using it to illustrate that there is only a 2 putt difference between a scratch golfer and a 10 handicap…)

Honestly if you want to improve, I think the first place to look is overall strategy. The first step to that is to look at where you are “leaking” shots… If you are averaging 34 putts, you aren’t losing anything on the green, so I wouldn’t focus your attention there, especially if you aren’t 3 putting.

Major Leak points, as far as I’m concerned (I’m just an internet stranger who thinks about golf too much):

Off the Tee:
Are you hitting driver? If not, you need to get confidence in your driver and put the longest ball you can into play. This simply makes the game easier.
Are you hitting balls into hazards? Figure out your dispersion, and eliminate hazards from your usual shot dispersion… Aiming at the rough isn’t a bad strategy if it means you won’t lose a ball OB.
Have you eliminated the two way miss? This is more advanced, but if you are both hooking and slicing the ball, you are at a significant disadvantage. One way miss: myth? You won’t “eliminate” one side of the fairway, but you’ll at least know which direction your ball will usually go.

Recovery Shots: Are you taking your medicine and putting yourself in a position to putt for par? If you are in the trees, get out. If you are in a bad lie and have to carry a hazard to get to the green, consider punching out… In every situation there is “statistically” smart play that will get you to the hole in the fewest strokes. It’s usually not the hero shot of hooking a ball around the tree. Avoiding big numbers is the best way to lower your score… it’s not as much fun (for me) but it’s much smarter golf.

Shots into the green: What’s your target and what’s your aim? Do you know your dispersion? This one is both simple and hard… it’s something I’m actively working on. "Pin seeking’ is a losing strategy. Get the ball on the green. Take more club (most misses are short) and try to hit the center of the green (for the most part, I’m still learning this concept, but aiming at the center is the best decision 80% of the time). You are already a capable putter, so getting that club into your hand faster is going to lower your score.

Around the Green: To quote my father “Get out, get on, get close”. Once again, putting is better than chipping and the closer you are to the hole, the more likely you are to make the putt. Worry less about being “below the hole” and more about being close to the hole.

Love that article…thank you. In keeping a journal for the first time ever this year, I think my biggest problem with missing greens is that I’m more often than not coming in with a 5 iron.

That leads me to 3 possible helps:

Hit the ball farther off the tee…certainly not my strong suit.

Highly recommend looking into to optimizing your driver launch conditions as well.

20 yards with the driver, which you can achieve before the spring, will put a 7 iron into your hands, except it will be an eight iron because you’ll be hitting irons further as well.

PGA Tour players average hitting 55% of the greens from 175-200 which would be 5I or less for most of them. If you are leaving yourself, on average, a 5I from the green what is the best case GIR average you can imagine? 33% or 6 per round? Your best path to improvement is hitting it further off the tee. Get, on average, the shortest club you can approaching the greens. Then, improving your short game and mid/short putting will shave a shot or two. Hit a few more greens, get up and down one or two more times, and you can cut the handicap several shots.

I think it’s the way to go if you want to change putting styles vs side saddle, simply because it’s less of a commitment…

That said, I think it’s important to figure out where you need to commit resources for improvement…

Pondering trying arm lock putting. Been looking at either a Directed Force or SIK, both come in the max 80 lie angle which is what I would be most comfortable with if arm locking. Would have winter months to dial it in.

Highly recommend trying a directed force if you can find one… they are different!

I have a Sik pro C armlock and absolutely love it. Let me know if you have any questions.

Nice. Of course these are individual things but what is the length you play your arm lock vs a “normal” putter, and what loft did you go with? Problem is that getting fit for these things is not the easiest.

I normally play 35i and would probably go around 43i for arm lock. For loft I am left eye dominant and have my ball quite far up in my stance so would likely be around 5 degrees.

I went with 43 inches long, 78 lie and 6 degrees loft with the la golf shaft. I’m 6’6” and use a 36” standard putter.
I putt left hand low with my armlock. This is my 2nd Sik. The first one was the same length, 79 degrees upright and 7 degrees of loft with the metal shaft…didn’t work as well as I wanted, so I sold it and contacted Sik to get “fit” over the phone. They were great to work with. Best I have ever putted.

I’d go sik if it only costs store credit!

I actually tried a side saddle putter yesterday. Rolled the ball very straight on an aligned putting mat, but struggled on the turf with no lines. It’s definitely a learned stroke!

The direct force is a neat concept, but I struggled with distance control in the regular putter more than usual and I alter have control issues.

Thanks. Yeah I would contact Sik to do a phone fitting beforehand to at least confirm if my own guesstimate is ballpark or not.

Conceptually side saddle should be the best but not sure I can get over the mental hurdle of doing it. An interesting thought would be to have two putters, one for lag and one for the let’s call it 10ft and in range. I mean people carry multiple wedges so why not putters!

An interesting thought would be to have two putters, one for lag and one for the let’s call it 10ft and in range. I mean people carry multiple wedges so why not putters!

I’m thinking very seriously about doing this. I’m quite confident that I can get really good with side saddle from about 12 ft and in and I’m already a pretty good lag putter. Seems like doing this could have a tangible affect on my game.

I mean why not. I usually only carry 12 clubs so I could easily fit in an additional putter. Tinkerus maximus, I love the offseason