Why Iron Play Is So Important For Scoring Potential

As you improve as a ball striker, you will get more spin. Just keep playing!

When I hit Pw off the tee on the 240m par 4 7th to a fairway down below my divot is shallow and starts way past my tee so I am hitting down getting ball first and I hit a shot that lands and runs. The only time I land and stop is on the 16th a 120m downhill par 3 when it has been raining and the green is soft. I just accept that hitting a hook gives me more roll and more distance and hope for an up and down when I get to the green as I have most likely missed left. My shots might land in line with the pin but take vicious bounces/spin to the left

Approaches is an aspect of the game that I’ve been working on for the past few seasons. Still have a looooong ways to go before I start posting any impressive GIR stats but I’m improving and getting closer over time.

And, of course, always working on the short game to improve my up & down percentage!

Yesterday I had 6 pars and 2 birdies hitting 5 gir and one of those ended with a 3 putt. That means 4 of my pars were up and downs and my 2 birdies were from hitting my sw to 3ft twice. For me one putts are way more important than gir.

You’ve mentioned before you are a better chipper than a putter… maybe you should focus more on GIR or Chipping as the result you are seeking… If 5 feet off the green isn’t going to change your average score vs your average GIR, then I’d just fold the stats into each other…

Missing a GIR means you have to get up and down to save par, even pros don’t get up and down at a huge rate (I think it’s 50%)… while most people can 2 putt on “regular” greens… There is a ton of variability here… at my home course, in the rough around the greens is a tough up and down, but most of the greens are small enough that three putts SHOULDN’T be a frequent occurrence… that’s not always the case.

Going back to my new found favorite word of the week… what is actually ACTIONABLE in your game? I can easily improve my strategy by not chasing pins and hitting more Greens in Regulation… I don’t have a good strategy to measurably increase the number of 1 putts I have in around (I can diminish 3 putts, which will be great… and hope that the same technique creates more sunk putts… but it will be 1-2 a round). If I want to get from a 6 to a scratch, I have to eliminate mistakes… To me, a missed GIR means I made either a strategic mistake or missed a shot (or both!) which means there is an actionable area I can improve on (better strategy, making sure I’m focused). 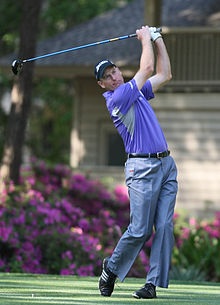 On August 7, 2016, Jim Furyk shot a 58 on the PGA Tour during the final round of the Travelers Championship, held at TPC River Highlands in Cromwell, Connecticut. The round set a new Tour record and was the seventh sub-60 round in the history of the PGA Tour. Furyk was 46 years old at the time of the round and in his 23rd year on the PGA Tour. He had won 17 times in his career, including the 2003 U.S. Open, his only major championship title. He also won the FedEx Cup in 2010. Prior to Furyk'...

Lowest putting round is 18 putts, which has happened multiple times… lowest round from that was a 63.

I hit hooks/draws so my my strategy is to aim as far right as possible without hitting trees and curve left back onto the pin. This makes my approaches land hot, bounce left and run. This gives me more distance at the expense of accuracy. The alternative would be lay up every hole and hit pitches with my sw which are fairly straight. I still think I would be better not laying up and being as close to the pin as possible. Big sloping greens means I try to avoid long putts. My only 3 putt yesterday was from pin high with a severe left to right slope which I hit too hard. Two things influence my score.First I need to hit a decent drive then the other factor is chipping well. My iron play and putting are fairly consistent. Consistently hit well but low and landing hot.

All of the above has changed. Now I hit my irons higher and straighter with my hooks changing into pulls or pull draws. Now I hit greens and stop instead of screwing left and off greens like when I was hitting hooks.

Love it! Great to hear of your progress. Let’s go!
I agree. Consistent and predictable iron play is what lowers scores.

Whats next for you?

@Qschool My hook cured itself after I started hitting lots of shanks. I cured my shanks by pulling my hands in closer to the body through impact and this has straightened out my swing path giving me straight to slight pull iron shots and the odd pull draw. Also the 6th hole at my course had the tee alongside the ob fence aiming at the trees on the left(tee usually 6m further left and about 3-4m higher)The only way to find the fairway is a dead straight drive alongside the trees bordering ob or hit a fade/slice. I worked out how to hit a power fade and now it has ruined my ability to hit draws so I am fading my driver. I am now more consistent off the tee helping me play some great golf

Congrats on the power fade instead of the weak wipey slice.

It would be hard for me to see the course from the other side since i have an ingrained draw.

@Qschool I have never had a weak wipey slice. I used my hook swing with a more open face to get my power fade. I am averaging 32 putts a round. My nemisis is trees. My bunker play has imroved since I swapped from sand wedge to lob wedge. Just need to hit more gir Today I shot 15 over with only 3gir (4p and 1bi)

Sounds like the tour is next then. Just pick links courses. Good luck!

@Qschool No where near it and never will be. I never practice apart from playing 6 days a week and my best round is 7 over

I just posted a new article on the site sharing some data from Shot Scope, and exploring why iron play plays such a vital role in scoring. Have a read here , and let’s discuss!

I know this has been said a hundred times but the coverage on TV is often pushing the myth that professional players should be within 10feet from 100 yards - or closer !

So often a commentator will tell me how disappointed a player would be when they stop one 20feet from the hole with their wedge.

I think I read here somewhere that they should show these averages as circular graphics on the screen.

Loving all the podcasts and listening to them multiple times for gems that were not apparent first time (or second) through.

Can you guys provide some tips for assessing lie in the rough? How would you know when hybrid is too deep and short irons would be optimal?

More important for me right now, how do you recognize flier lie situation? I think i hit my first three in my life yesterday after 25 years of golf. Im historically always sweeper and never had to worry, but suddenly after incorporating some suggestions, i’m hitting down on ball. Unfortunately all three went ob long (shockingly long) but i’m hoping thats forward progress.

Do you take one less club? Choke up an inch? Punch it? How to estimate flier distance effect—is it different for different clubs?

…how do you recognize flier lie situation?..

…Do you take one less club? Choke up an inch? Punch it? How to estimate flier distance effect—is it different for different clubs?

As I understand it…and I may not at all, it’s a backspin effect. The grass gets between the ball and clubhead, vastly lowering the coefficient of friction. The ball still rebounds off the clubface, but there isn’t as much torque applied to the outer surface of the ball. Backspin is greatly reduced.

OK, backspin’s gone, now what? Backspin provides, via the Magnus Effect, lift on a sphere like a golf ball. Drag comes along with lift. When there’s lift, there’s drag. Consequently, there isn’t as much lift on the ball holding it up from a pure ballistic trajectory, but there’s a lot less drag too. Velocity is going to remain higher, for longer, but ball flight will be more purely parabolic. The ball will run a lot more after impact too without a lot of backspin.

I expect the effect to be most pronounced where backspin is most prevalent, and that should be with short irons/wedges. Is that the case, everyone? That said, “greasing” the ball, applying Vaseline to the ball and/or driver face, to reduce friction and reduce spin, was supposed to be ‘one of those secrets’ Vegas guys used to get more distance and less offline drives. (No idea if Notah Begay’s infamous alleged spitting on the ball had the same effect)

I would ‘expect’ the flier effect to be where sufficient grass could get between the ball and face to kill friction, but not so much that firm solid contact with the center of the ball and the accelerating clubhead, couldn’t be achieved. Since you’ve stated you’ve been hitting downward more, and probably getting more compression on your strikes (though that’s not the only way to achieve that), you’ve been getting more spin. And really noticing now when the spin goes away.

Go to Trackman or Foresight’s online ‘Launch simulator’ and monkey around with spin values for a given clubhead speed and angle of attack, (EDIT: BZZZT!! It’s Flightscope’s. Here: https://flightscope.com/products/trajectory-optimizer/)
for a much better estimate of the effect than I could give you. My guess, from vaguely remembering Greg Norman’s golf book, where he discussed fliers, was that it was up to a 3-club effect. Though he did talk about a 300 yd 5-iron…so, yeah.

Me? I’d take one club less, for the carry, but I’d expect it to run. Judging by my ‘hit the ball’s equator’ shots—which also should really minimize backspin—jeez, another 30-40 yards of run for say a 7 iron?