I’ve been playing a ton of golf on simulator indoors since winter has arrived and I’m really seeing the benefit of sticking with one shot shape with the driver. I feel totally comfortable now aiming at the right edge of the fairway and hitting my stock draw shot every time.
I apologize if this has been asked before, but my question is this – what’s the recommended play on a hole that has a forced dogleg? Say for example, that you have a 400 yard par 4 with a dogleg to the right at 200 yards.

I know it probably highly depends on the individual and what they’re good at and comfortable with, but I’m curious to see what the DECADE recommendation would be.

Hit the stock shape is the decade advice 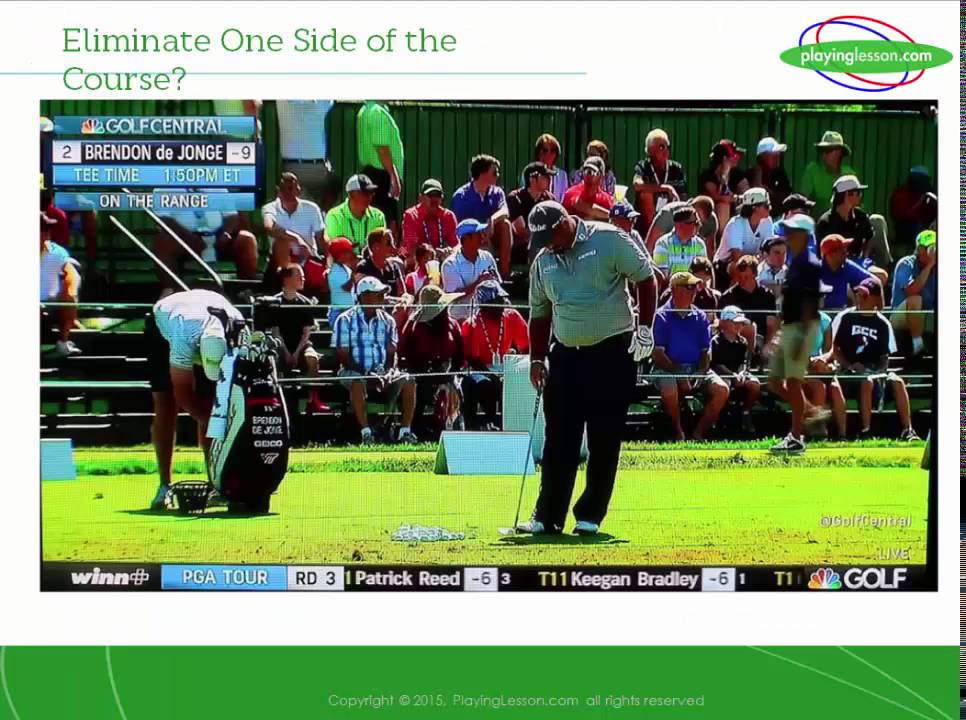 I had seen that video before, but good to have a refresher. He didn’t really explicitly address doglegs though - on the holes he used as examples, some had some curve to them, but had water rather than trees on the inside of the curve. Which changes the equation in my mind – water is more penal if you hit into it, but it also easier to clear vertically than trees.

So if sticking with your stock shot off the tee is a core tenet, I take that to mean that unless you can clear it vertically without a problem (in the case of water or fescue, etc.) you can’t really think of taking much bite out of a dogleg most of the time if it curves in the opposite direction of your normal ball flight. Am I thinking about that right?

I guess what I’m doing is weighing the strokes gained/lost possibilities – which is more risk – going against my natural shape and trying to play a fade around a corner with the possibility of a double-cross or of over-fading, or laying back to a 200 yard approach which has a high probability of missing the green?

He argues you can hit a fade or draw with 3 wood by changing ball position… and that’s his preference for dog legs where you can’t send driver.

It works for me… I can hit a draw with my 3 wood… I don’t do it often, and don’t try to draw it. The hole I do it on has a huge bail out area to the right.

Thanks, I’ll have to play around with that. I usually draw my 3 wood even more than my driver, but honestly I never even try to hit a fade with it. In theory though, might be easier than driver.

When I started this game, the predominant ball flight of my game was a fade ( more like a slice ), however, it is predictable and seldom failed.
My playing partners often in awe when I needed to put the tee shot over the hazards and bring it back into the fairway.
For instance, a long hole , dog leg right with water hazards along the left of the bend; my tee shot was over the water and back into the fairway. Gradually, my ball flight was improved and to a point I could almost do all the 6 major ball flight. The high draw was the most difficult for me to be consistent.
Eventually, I had settled into most straight with a 5 yard fade. My playing partners called it a reliable baby fade. Can still do a draw but not my most confident ball flight to perform under pressure.
The point is, play the ball flight you’re most consistent with , and allow the ball flight to fit into the shape of the golf course layout.
I think it was Curtis Strange who answered a question posted to him by the press, of why he changed his predominant ball flight during a tournament. His answer was, whichever he had found on the driving range during warm up that morning. These guys can do magic with the ball flight but they will have a more favored way of ball flight in any given day, so they’ll stick to that for the day.
Lee Buck played a draw to a par three and Nicklaus gave him a funny look and said "what was that ? " Recalling this during a skins game. Since Trevino was famous for employing the fade.
The story is, trust whichever work the best for you. It’s fun to try to work the ball flight with 3 wood ( maybe ), but for the majority of the weekend golfers, leave the practice on the driving range, so you will enjoy your round of golf more, and those around you will enjoy it more because you won’t be frustrated over something which didn’t work as well as you’d expected.
Most of us will not have the time to master the 6 ball flight, so play with what you have. Some of the advice from the internet are grand in theory but could not be applied to the general golfers.

I think the order of priority would be:

Just depends on the hole, and how much left you have into the green. once you get down to wedge in hand, it’s not worth it to take on more risk off the teebox.

What hole is this? Would like to see a sat view of it. This one appears to be a very tough decision based on the distance of the approach shot. It may end up being just how much risk you can stomach at that time.

There are some holes where strategy has changed to more aggressive once i realized the penalty (light trees, light rough or large fw bunker) were not as penal as laying back 50 yds

2022-01-06_13-22-44867×320 75.3 KB
Here’s a couple examples from my home course. The cone shown here would be with driver. The tricky thing with the tee shot is that to clear the corner, especially with a draw, you have to hit it fairly high to clear the trees on the right. If you happen to hit a low screamer and clip one of the trees near the tee box, you are in trouble. But if I hit a normal good drive, I have a wedge to the green. Laying up at the corner is tough because it pinches to less than 30 yards wide at the corner and you are left with a blind uphill shot of about 170 yards. Also it brings OB more into play.

To me, this seems like driver is the play, it’s just a lot easier when my draw is curving 5 yards instead of 25 yards.

2022-01-06_13-27-57827×249 58.5 KB
Here’s the other one, and I hate this hole with a passion. Hitting a straight ball off the tee, you start running out of room on the left side of the cone at only about 152 yards, granted the cone should be a little narrower for an 8-iron. The fairway slopes hard from left to right also, so you can aim it into the left rough and have it bounce down. But with a straight ball of the tee, and eliminating the OB on the left, you are left with about 185 to a very small green, with the ball sitting well below your feet. And if you miss the green even 1 yard to the right, it will likely bounce down the hill into the junk below.

I’ve tried everything on this hole. If I hit a perfect power fade with driver, I can get to within 60 yards of the green, but if you pull it at all, you are OB. And missing right is no picnic either, it slopes hard away further right and you usually end up in the adjacent fairway with a million trees between you and the green. Looking at this strategically, it seems like maybe the play is to play short off the tee and make sure it’s in play, get the next one conservatively somewhere in the vicinity of the green and hope to get up and down sometimes. Play to eliminate a 6 and hopefully make a 4.

8 iron is definitely not optimal

This one looks like full send. You could drop to 5w or 3w and probably not have a huge drop in scoring potential. May help carry the trees but that is dependent on your flight of course. Laying up looks like a loser here.

Play to eliminate a 6 and hopefully make a 4.

I think this sums up this hole well. There are holes where there is just nothing that will help except perfect execution. Those are the “separators” IMO. And make the golf more fun but also way harder.

There are holes where there is just nothing that will help except perfect execution. Those are the “separators” IMO.

I know the strokes gained calculation is really against your competitors, so sometimes settling for a bogey is not the worst thing in the world. What makes this particular hole even more painful is that in my league, a lot of the guys are hitting from the senior tees (65+), which on this hole is way up near the beginning of the fairway. It’s not even a dogleg from there and the guys that hit it relatively longer can practically get it to the green. But sticking to a conservative strategy and trying to eliminate OB is still probably the way to go.

Thanks all for the input. Gives me a few things to work on in the off-season.

Wait, what? Maybe I’m misunderstanding? I thought, on a driver swing, if you move the ball toward the target from optimum (the “top” of the circle as viewed from above and behind the golfer), that the swing path would go more outside-to-in. Which is why, e.g., Adam Young, talks about hitting it to the left (but ‘straight’) about 20 degrees or so from parallel, because his ball position is so far forward to enhance his launch angle. At that point in his swing, the clubhead’s past the middle of his arc, and is starting outside-to-in. And UP! (LOL 18 degree launch and 1400 RPM spin)

Maybe I misread it?