Due to my quest to play all the Coore-Crenshaw courses designed in North America, I have been fortunate to play some cool tracks but in terms of experiences, two stand out.

I also got to play Black Sheep with the golf course architect Dave Esler. That was quite the experience! It was fascinating to hear his thoughts on the course as it has matured.

If/when someone needs a fourth at Cypress, I imagine that experience will top em all (although, admittedly, I may be building up my expectations too high :P).

Don’t be jealous! It was an awesome experience, but it was still just golf.

It didn’t change my life.

Having fun at golf is all that matters.

Hallowed ground is a spiritual experience for me. Golf on a ho hum course is just golf. Golf on an incredible piece of property created with thought, purpose, and style…something else entirely.

I get it, for sure… I never thought I’d have the opportunity… it’s an amazing place and is a memory I will cherish for life…

It’s still a golf course. 18 holes. Playing with friends. If you gave me the choice of playing with the same foursome at a dog track vs playing with three guys I didn’t enjoy at pine valley, I’d go to the dog track every time.

I enjoyed every minute of the experience, but what I love about golf is that it’s a time to spend with people. It was an amazing trip and I understand how lucky I am… but playing with people I enjoy spending time with is far better than playing an exclusive course.

Completely agree the company can either enhance or ruin the experience. I’m glad that my dad has been with me to 99% of the more memorable courses. I’ll cherish those days as long as I live.

Actually writing a book about it.

As a side note, if you ever want to play Valhalla, shoot me a message. I haven’t played it yet, but can get on.

My man. Good chance I take you up on that sometime.

Just let me know… a friend of mines brother is a member and he would be happy to host. Valhalla is more a cost than invite problem.

I played TPC Boston in a tournament through a local series that plays some private clubs in New England. That’s really not especially hard to play though. I think you are meaning more like The Country Club in Chesnut Hill - Boston , that would be something special for me or anyone for that matter.

Baker Hill is probably the nicest track in New Hampshire, they host tournaments through the NHGA some years. I will be up there on the 14th.

I need to make some more connections!

The summer I spent as an apprentice pro at a club south of Denver, we would trade rounds with the other apprentices at clubs in the area. I got to play Cherry Hills CC once this way (site of the 1960 US Open), but wound up being a pretty meh experience for me (in hindsight, likely much more about the people I was playing with and my general feelings about golf at that point rather than the course).

I have played AGC and love the track. The entire club is devoted to golf and that makes it extra cool imo. It is my goal in life to have enough career/professional flexibility to get a membership out there

Currently just live too far away to make it work

I’ve had a lot of great golf experiences, Scotland, Ireland, Kohler, Palm Springs, Pinehurst a couple of times every year. But the coolest was when I got to play in a Member-Guest at Congressional CC just outside Washington DC. A friend had married a woman who was a member there (invited because her father was a long-time member, I think), and he invited me to play. This was only a couple of years after the 1997 US Open, which I had worked as a volunteer marshal. I was pretty awe-struck for the first few holes, and its still a great memory.

I was invited to play a fantastic course last weekend-
Canyata.

Yes you’ve never heard of it and yes you couldn’t find it without gps. 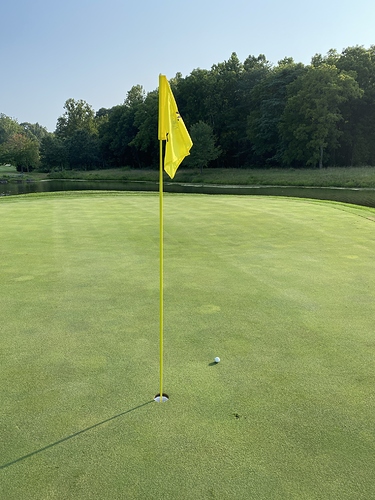 Closest I’ve been to an ace in my life.

Cypress Point many times. It’s the greatest place on earth.

Spanish Bay and Spyglass were pretty surreal for a Midwesterner.

Most memorable experience was Olympic Club the year before the Open. Our SVP knew a board member who was a member and was happy to host. It was fun hearing the caddie’s stories and being able to try some of the shots the pros would be facing.

One that got away: Royal County Down. My wife and I were visiting and she really wanted me to play. I didn’t have my sticks and hadn’t been playing much, so I didn’t. :doh:

She didn’t bat an eye when I wanted to play Torrey this past winter. “Go. You still regret not playing RCD.”

Royal County Down is definitely all it’s cracked up to be. I played there in 2017 in a trifecta with Royal Portrush and Portstewart, which hosted the Irish Open later that year. I was in a zone for those three days. Started with a 79 at RCD, 82 at Portrush, and 83 at Portstewart–and just as those scores indicate, I was starting to lose my game. Later in the trip, I couldn’t even break 90 on much lesser courses.

By the way, the secondary course at RCD is definitely worth a spin. Same great conditions and occasionally some spectacular shots required, just like on the big course.

My exclusive experience though was a three-day, two-night trip based at the Marriott at Sawgrass. Had access through one of those credit card “experiences,” and I was glad I took advantage. Two rounds of golf, one at the TPC, one at the Slammer and Squire at the World Golf Hall of Fame. On the latter round, all the groups got to play a par 3 with Colin Montgomerie who teamed with a golf historian later at a dinner at the Hall of Fame to do a tour and a post-tour chat about his life in golf. At most, between participants and non-participant spouses, maybe 60 people.

I even won a prize with a pair of Oakley TPC branded sunglasses and a $100 gift card to the TPC pro shop. Overall, from start to finish, the golf, the food and drink (all included), and having a chance to see a different side of Montgomerie (he was more engaging with us than I’d ever seen him at any of the tournaments I watched that he played in), it was a tremendous golf experience.

And maybe not as exclusive but still cool, attending a practice round at the Masters. Augusta National is more than they say.

I’ve been pretty lucky with my experiences with golf–especially since my rounds at Pebble, St. Andrews, Congressional outside of DC, Carnoustie, Turnberry, Ballybunion, Lahinch, and Bandon Dunes fall behind the above.

My bucket list to play would be: St Andrew’s (and anyplace else on the other side of the pond), Augusta National, Pebble Beach, Baltusrol, Congressional, Shinnecock, Winged Foot, Pinehurst #2…probably a few more of the classic courses…(which will most likely never happen, but I can Dream)