Book rec? Looking for story of 18 handicap who gets to 9

Tom Coyne’s “Paper Tiger” is along these lines and a great read.

He spent about a year trying to go from 11 (I think) down to scratch and attempt to Monday qualify for an event.

I highly recommend it as it was a fun journey to follow.

I don’t know of any books about going from 18 to 9. Probably because it’s not that difficult. It certainly doesn’t require complex lessons or fitness routines. Just follow Hank Haney’s three rules:

“I have a very simple concept of golf,” Haney said over the phone. “There are three things you need.

“First, you have to eliminate penalty shots. Golf’s so hard, you can’t add them up two or three (strokes) at a time. You need one swing, one shot.

“Second, you have to eliminate 3-putts. You don’t always have to make a putt. You get outside 15 or 18 feet, even the touring pros make only about seven percent of those putts.

“Third, you have to eliminate two shots (from the same position) – for example, two pitches or two sand shots. You don’t have to get the ball up and in, but you have to get it on the green.”

Tom Coyne’s “Paper Tiger” is along these lines

Came here to say this. Good read for sure.

Thanks - just ordered that. Now I have to find more time to read - and yet not play less golf. Solution - no chores?

I’d say the two Pelz books (short game and putting) would be good choice. It can be super helpful in changing your perspective on scoring and practice and perhaps the most straightforward way to lower your handicap. There are other more modern books that can teach the same thing or better but they are a good starting point.

This is a great thread. Missed it first time round.

This is my story. 2016 - I set a goal to get from 18hcp down to 9.9 by the time I turned 50 in 2020. Spoiler alert, I’m now on 19.6 and pushed my target out to 2025.
As well as owning premium equipment, I set goals, I practice, I read, I’ve learned strategy and psychology. I keep fit and work on mobility. I have training aids. I’ve been for lessons. I focus on process rather than outcomes. I diligently manage and my analyse my Shotscope data identifying and setting new goals. I have a journal where I keep notes, reflecting on rounds and practice sessions. I am doing everything I can think of but am not improving on average. I occasionally have flashes of playing at around 15 but that’s about once or twice a year.

Why do I do it? Believe me it is so frustrating! I nearly gave up in 2018 but I know I am slightly obsessed. I just love the game and just keep turning up snow, rain or shine. I grew up in Scotland and golf is in my DNA.

Any luck on this journey? Finding marital bliss? Get new clubs?

Excited to see this thread. I just had a lesson this week and told my coach that my goal was to drop 10-12 strokes off my game. After a 12 year hiatus from golf, I played 93 rounds this year and finished at a 21 handicap. Would love to get to a 10-12 in one year. After seeing my stats, coach said no problem. “We’re going to eliminate your 4 penalty strokes per round and drop about 5-6 putts per round first,” he said.

I’m getting monthly lessons and will dial up as needed once the season starts. Excited to see how it goes. I just joined this site last week, so I can keep you posted on my journey as well, since we match up pretty close.

I did read the Rotella book earlier this year. I will add the others to my reading list.

Please do keep us updated!

Eliminating penalty strokes will be a huge help, but that also implies you either have a big 2 way miss or aren’t selecting appropriate targets… Improving that will help across the course, and not just on the holes you are currently getting penalized on. Golf is much more fun from the fairway!!

You are on the right path with monthly lessons, and I hope your scores start dropping soon!

Thank you. Have historically fought the two-way miss, especially off the tee. With a new swing in the works, I have already made progress there. Purchased a perfect putting mat last month, so I’m getting some good practice during these cold winter days.

I commented about the latter book in another thread, so if you do some searching you might find it.

I spent time with Dan McLaughlin when he was in Florida, in the early stages of his journey… he is an interesting person… he never did make it to the tour or complete his 10,000 hours. He had injuries, not sure his plan was solid, didn’t have the financial backing he needed, … but he persevered for quite a while before giving up his dream. Here is a link to an article about The Dan Plan in The Atlantic. 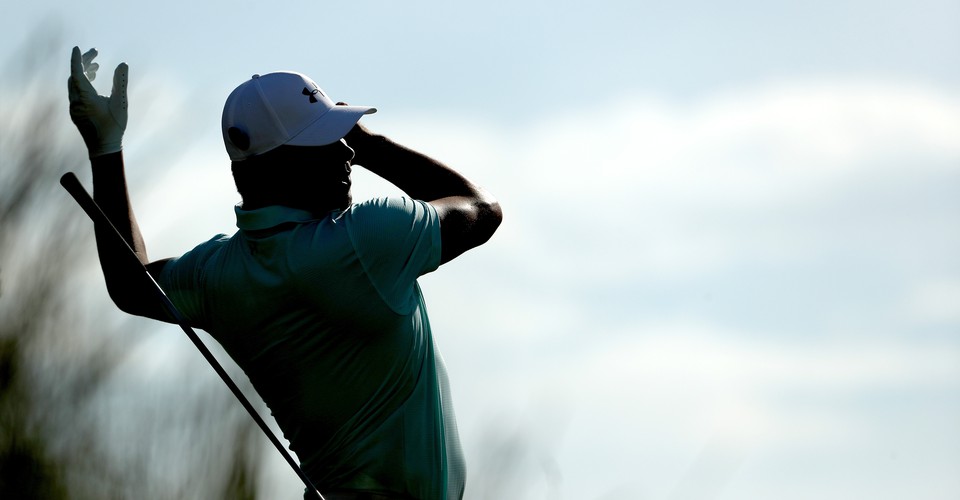 The Average Guy Who Spent 6,003 Hours Trying to Be a Professional Golfer

Dan McLaughlin got famous for valuing hard practice over talent. Then he didn’t reach his goal.

Below is a post from a PGA Golf Pro who helped a guy go from a 36 HCP to a 6.2 in one year. His player was recognized in one of the golf magazine’s as having made the best improvement in his GHIN HCP in one year.

Here’s the story behind it, and the disclaimer. About 8 years ago, I had a student come to me who was a 36 hdcp - best round 110, averaged round 120. His goal was to shoot par that year. I’ve seen the threads on here about doing this, and it is possible but it is not probable. I explained to him that it would take time, money, instruction, and a lot of work with no guarantee that it could/would be done. He was 28, not athletic at all, but had time, money, & desire. We spent 3 months working on his swing (very over-the-top, lots of moving parts) just to develop a consistent, somewhat solid fade. Since his goal was to score, I developed a program that is scoring based - I have tweaked it some over the years, but basically it’s about the same.

After I created this, I gave it to 4 tour caliber players (1 PGA Tour, 2 Nationwide, 1 NCAA All-American) and asked them to run through the program and tell me how long it took them to complete & if they would change anything. It took them between 1 1/2-2 hours to complete and they felt it was great for someone looking to lower their handicap. I gave it to my student and he came back a few days later saying he’d spent over 6 hours on the program - and hadn’t completed the 2nd stage (lag putting)! I knew then, it would work. We continued to work on his game, and he practiced the routine constantly. Over the next few months he became one of the best putters & wedge players at our club, and he shot 72 in October of that year. When he shot par, he didn’t carry a driver or 3 wood and played a low, fade (almost a slice). He was recognized as the most improved player in the country that year - ending the year as a 6.2 handicap. Let me tell you, for a couple months, no one could touch him in a net game - it was fun to watch, and he credits this routine for allowing him to reach his goal. He worked his a** off, and he needed more than just this routine (technique, mental game, strategy, etc.), but this is easily a guideline for players instead of just beating balls. This program is currently used by at least 8 NCAA golf teams as well.

Sorry for the long intro- I just didn’t want to drop the routine down without sharing the background & what it is designed to achieve. If you have questions or anything you believe I should add, please don’t hesitate to let me know!

Program A, First 2 weeks, in this order:

Driver:
6 out of 10 land & stop in fairway (if you’re on a range set 2 targets the width of a common fairway).

Love your story and your persistence.

There’s selection bias in storytelling. Of course people who hit goals are quick to share, and those who do not often don’t. But my guess is there are more with your story than the gainers.

I wonder: has anyone ever analyzed the national handicap data to discover how many people, who have a steady handicap of X (say 18) for a few years, ever shave 5+ strokes off their rounds?

Thanks Juan. Look fwd to reading the books, and I like the drill routine.

rse people who hit goals are quick to share, and those who do not often don’t. But my guess is there are more with your story than the gainers.

You might contact the GHIN folks who have the data on 2.3M golfers for this information… Or maybe ask the folks at ARCCOS golf as they have been tracking data for a while, not sure for how long.

Several years ago, I wrote to the group that handles Shotlink and asked about some putting stats… and they were kind enough to share the data… which previously had never been published. My point, is sometimes asking can get you what you want.

Now as to your specific question… how many years in a row would a person have to have an 18 HCP for you to be satisfied? Then over how long a period could they take to become a 5? One year, two years, … I am asking since the details would have to be very specific to query the database.

I wonder: has anyone ever analyzed the national handicap data to discover how many people, who have a steady handicap of X (say 18) for a few years, ever shave 5+ strokes off their rounds?

This is a good question and one worth thinking about… from my experience at a local country club, the majority of golfers don’t spend much time working to actually improve. I know plenty of guys who take lessons and say they want to get better, but I don’t know many who set out an actual goal to improve and then build the processes (and analyze their flaws).

I’d be curious to see not only your data (people improving over one season) but also what happens the following season… my bet is most regress to their old handicaps.

Would be an interesting data analysis project… might have to see if I can find a data set to play with.

If anyone at USGA or Arccos reads this, consider: Lots of reporters/bloggers/amateurs play around with all the PGA data that gets released. Imagine if you did the same with GHIN or Arccos data, made it easily available for nerds to play with. I would play with data if easily available, as I’m sure many others would.

What are we trying to learn? “How often does meaningful improvement happen among golfers, once somebody hits steady state?” Is that 1% of the time, 10% of the time?

I don’t have strong feelings about whether steady state means 3, 5, or 7 years.

And does meaningful mean the handicap changes by 5, by 3, by 10? Again, no strong feelings.

Exactly, Craigers. What we really care about is something like “What are typical gains for adult steady state golfer if he devotes 3-24 months, 1-4 lessons/month, 2 to 5 hours/week of practice, to improvement?”

That data set would sort of lie with Arccos, which could capture not just the calendar data, but the actual “number of swings” data.

This is incredible. Thank you so much for sharing. An incredibly daunting practice routine. I love having a playbook like this.